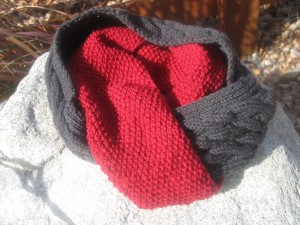 We used ewe ewe yarns wooly worsted washable merino! It is great to knit with and feels so soft!

If you would like to knit this with a friend get twice the amount of yarn:

Each friend picks a color and makes one of each pattern (seed stitch and cable), than you swap one off them. Now interlock and finish with kitchener stitch.

On the red one we used a US size 7 circular needle and on the charcoal one a US size 8.

You will also need a cable needle and a tapestry (or darning) needle.

The red one is super easy knit in the round in seed stitch.

For the long (pictured version) that can be wrapped twice,  cast on 199 stitches.

For a shorter one, which lays around the neck once, cast on 169 stitches.

Join in the round (careful not to twist it) and k1, p1 over and over again. Because you cast on an uneven number, the seed stitch pattern will emerge automatically!

When you feel it is high enough or you are almost running out of yarn: bind off!

For the second cowl (grey in the picture) provisional cast on 44 stitches.

Kitchener stitch it together around the red cowl.

(I hope you can tell how by the picture above.)

This entry was posted in Free Pattern. Bookmark the permalink.